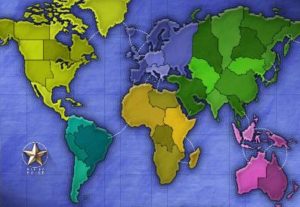 LandGrab.net is an online Risk playing game website that has been around longer than anyone. I interviewed the developer, Desau to see what makes it tick.

1. LandGrab has been going strong for quite a long time. When did it start are what was your impetus to create an online Risk site?

Desau: LandGrab was born from an earlier private project I developed to play Risk with some friends back in California while I was living abroad, in France. That project started in 1997 and was used privately be a small group of my friends for a few years. That group of friends started growing until the old system really wasn’t maintainable and usable by the larger user-base. I started thinking of remaking it for a larger (public) audience around 2002-2003, then actually started writing the code in 2004. LandGrab was released publicly in August of 2005.

2 LandGrab has many features which are found no where else in the Risk playing world. Which features do you think make LandGrab special and how did you come up with them?

Desau: Yeah — I think just that point sets it apart. It’s sort of the “kitchen-sink” variant on the net. There are a number of really good sites out there, but I’ve always tried to make LandGrab the one place where you can find “your” rules. When I was growing up playing the board game, we all had our own house rules. I played in a number of circles of friends, and a number of different houses. Each house had its own set of rules .. and they seemed to morph from game night to game night. So I thought it would be imperative to allow the game creator to set up the rules however he or she wanted them played.

Recently, I added “Bridges and Walls”, which allow the players to control game borders as the game is played, by devoting soldiers to become engineers for a few turns to “build” bridges or walls. I don’t think I’ve seen this anywhere else, so I consider that one a LandGrab-only setting. I came up with that idea, as I have most, by just playing the game. I still love to play it, and I’m always in at least 20 active games at any given time. I was playing a game and thought to myself – “it would be great if there was a wall here, so I didn’t have to defend this border anymore …”

3. LandGrab has tons of customizable game settings. You can adjust the cards, armies, and over all game type. How do you as a developer decide what to put in and what to leave out? What are some of the most and least popular settings and have any of them surprised you?

Desaeu: I try to let the user-base drive this. If I see a particular feature is requested a lot, I’ll probably give it more thought than one that isn’t. Beyond that, it’s whatever I think would be fun and cool. More about this in question #8, but since this is a hobby for me, I write code that interests me and keeps me engaged.
Most popular, which surprised me, was realtime. I never expected so many people would be willing and excited to sit down for 3+ hours and play a full game with total strangers. Realtime games on LandGrab are much more popular that I had originally thought. As for rule settings, the “area-based reinforcements” has been a bit of a dud.. it may get deleted at some point.