In the first of a series of interviews with strategy game developers, we take a look a new and promising entrant, atWar.

While atWar is too dissimilar to Risk to be included in the review section, it will certainly appeal to Risk and turn-based strategy games.

PRO (PlayRiskOnline):  How would you describe AfterWind in a single sentence?

Ivan (of atWar): A browser-based multiplayer strategy on a real world map.

PRO: What was the impetus that led you to build an online multiplayer strategy game?

Ivan: My brother and I wanted some kind of a project together – something with a potential to become commercially successful, but also something we would be passionate about. A website, perhaps, or a web game. A game seemed like more fun – and since neither of us could draw, we decided to make it a strategy game (which doesn’t necessarily require fancy graphics). We felt there was a significant lack of good strategy web games on the internet (though many appeared during the 2.5 years it took to develop our game), especially if you wanted something more complex than a basic Risk-type game. At the same time, web games seemed like the future of gaming, and we wanted to be a part of it.

PRO:  The design of the game and site is very professional.  Describe your team and how long it has taken you to get to this point.  Is atWar full-time venture?

Ivan: The team is me (Ivan, design/website) and my brother (Amok, programming) – originally from Estonia, but currently residing in Switzerland and Cyprus. I had a background in web-design (being a freelance web-developer), but zero experience with game development or any non-PHP programming. Amok is very good at programming and his previous job involved some simple Flash game development. We make a perfect team – doing what we’re good at, without interfering with each other’s work. We both have other jobs/projects, so the progress of atWar was rather slow, especially in early stages. It took more than 2 years to be able to launch a public beta.

PRO: While not exactly Risk, atWar seems to have gone a few steps beyond Risk.  Describe how AW differs from Risk and why you decided to go in that direction?

Ivan: We were big fans of games like Risk and Civilization – however, we definitely didn’t want to create just another clone. We wanted the game to be rather simple on the surface (like Risk), but with some extra ideas piled on top – some borrowed from other games, others our own. For example, the primitive geography of Risk was always somewhat frustrating to me, so one of the first things we decided was to take the action to the realistic world map, present day, with as many countries and cities as we can fit in (160 and 500) and real numbers for population and GDP. We also wanted more than one unit – and having 10 (at the moment) really adds a lot to the variety of gameplay. One of the more radical ideas we had was to abolish all grids and paths and allow players to move units freely, to any point on the map. This decision brought massive technical difficulties, but we felt it was the right step towards finding our own path. These are perhaps the most significant differences from Risk.

PRO: Why did you choose do use Silverlight?  Did you know that another Risk-based site, WarLight.net started using Silverlight but recently moved it over to a flash platform?  Do you worry about the acceptability of Silverlight?

Ivan: Silverlight was really the only way to create what we wanted – a complex web game that could hold its own next to regular games. In the beginning, we considered Flash, but with its awkward Actionscript and insatiable resource hunger, it just didn’t have enough muscle to pull the ambitious game we envisioned. HTML5 was still in its infancy back then, with hardly any browser support. And even today, making an equivalent of atWar in HTML5 would be enormously complicated, not to mention 5 times more time-consuming. On the other hand, Silverlight was a very promising new platform that allowed using C# in combination with XAML, was good for building a server-client type of application, was running very smooth (even in version 1!) and could handle the load well. So, we decided to go with it.

After releasing the game we encountered quite a lot of hostility towards Silverlight – stemming mostly from the fact that it’s developed by Microsoft, and that it’s not available for Linux users. On the other hand, I never heard any complaints about the actual performance of SL, and I myself have only good things to say about SL – developing applications with it is an amazingly smooth experience. We hope that it becomes more widespread in the future and finally gets a decent Linux port. 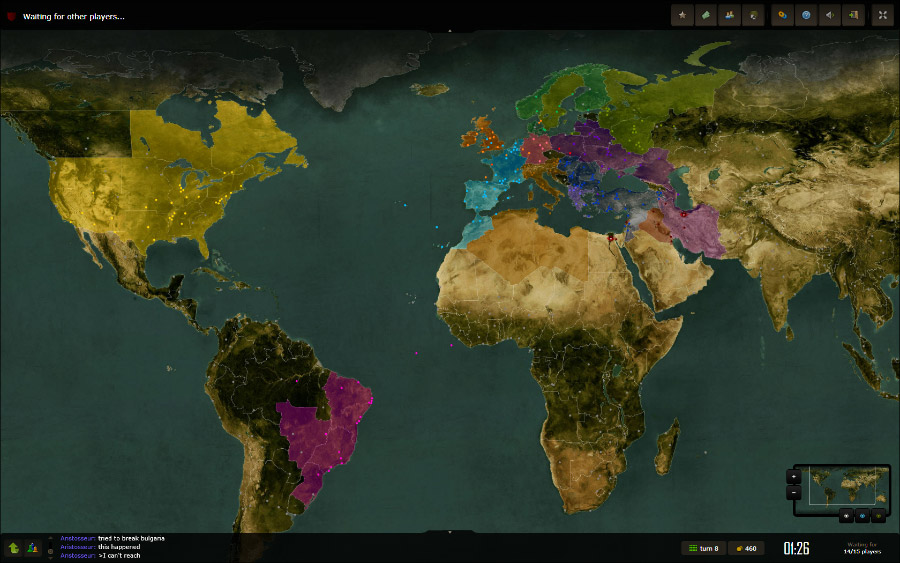 PRO: Do you have a revenue model?

Ivan: At the moment we’re just focused on perfecting the game and building the player base. We do have some ideas for the future, though – perhaps something like premium accounts.

PRO: The realistic world map is great, but you have any plans for fictional or different maps to play on?

This is something we would like to do in the future. Unfortunately, our engine makes it rather difficult to add selectable maps, so perhaps we’ll just concentrate on the one we have and various options for it.

PRO: Describe the current atWar community and do you have any plans in that direction?

Ivan: In the beginning we found ourselves overrun by a big group of Turkish players – they refused to use English in the chat and were rather rude on a few occasions. Things have improved significantly after we started advertising on reddit.com – they have a great community there, and we now have a small slice of it. Overall, people seem to be polite, helpful to new players and interested in game development. We now have a constant stream of ideas pouring through the forum. We certainly want atWar community healthy and thriving. We already have the forum and a multi-channel in-game chat and are planning a kind of ‘clans’ as a way for players to organize into groups. There are many other ideas too – for example, tournaments and card-trading.

Ivan: Most likely there will not be a huge jump in game features once we hit 1.0 – it will just mean that the game is (mostly) bug-free and balanced. I guess we will arrive there soon since we’re running out of version numbers! (currently: 0.94).

PRO: Do you have a customer acquisition strategy?  The online gaming space is always crowded with new entrants all the time.

Ivan: One thing we’re not particularly good at is the promotion. Sometimes it feels like we’re hitting aimlessly at all directions, with little results. Promotion takes a lot of time – precious time that could’ve been used to add some cool new features to the game, and this is frustrating. Even so, we’re quite pleased with what we’ve achieved with our modest efforts – there are always some games open in the lobby, and we gained 1600 registered players in 6 weeks, with more coming every day.

PRO: What would you say is the single most important strategic tip to winning an atWar game?

Ivan: Never get involved in a land war in Asia! No, wait… This: choose your starting position wisely!

PRO: Describe a typical atWar game.  How long does it take, how many players, what is the commitment from each player looks like?

Ivan: Depending on settings, a game can last from 20 minutes (small map pre-set, few players) to hours ( the whole world, 10+ players). Games can be limited by setting the maximum number of turns – after which the player with the highest score wins. The maximum number of players in a game is 15 – however, a typical game would have 4-6.

PRO: Do you have any plans for mobile applications of atWar?

Ivan: We might be able to port the game to Windows Phone 7, since it has native Silverlight support. Will probably have to strip a few things to make the application lighter, though.

PRO: How has your response to the facebook application been?  Do you find more players using the app or the website?

Ivan: In one word, underwhelming. We expected a huge stream of players pouring in since there are few games on FB that can compare with atWar – however, FB turned out to be a tough market to crack. We estimate that only 1-2% of our players are using the app. When it comes to FB games, there’s an enormous competition and many of them are really fighting hard for attention. Zynga and several other companies are spending millions on advertising. We don’t have a big company backing us up, so we’ve only spent $50 on FB ads so far…

There are lots of tricks to make it big on Facebook, and we still hope the application will get noticed. We prefer to spend more time on improving the quality rather than on promotion, so perhaps if we manage to really impress people, word-of-mouth will eventually do its thing.